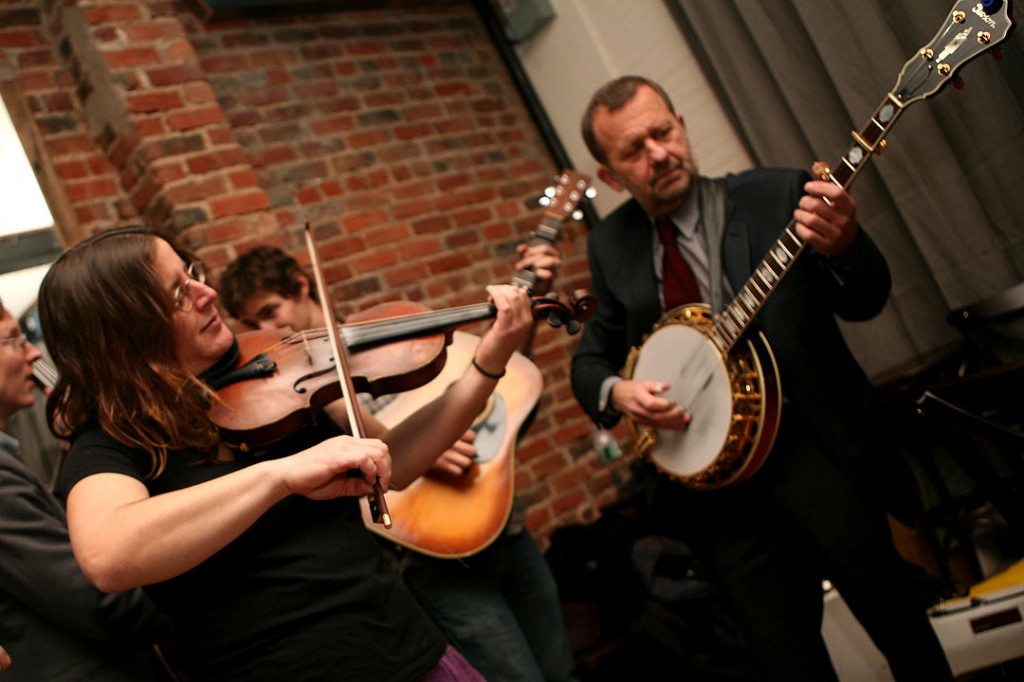 “From my perspective, it fits into all the themes of the book,” Barboni said from behind a kitchen counter made of the structure’s former floorboards. “Green is not a newfound subject for Carl.” 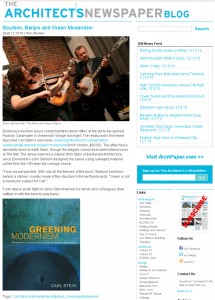 From atop a small flight of stairs Stein thanked his family and colleagues, then settled in with the band to play banjo.

In his statement to the crowd of well over 100 in attendance, Stein offered:

“My thanks to Norton for publishing Greening Modernism, to Kristen Holt-Browning who initiated this project, to editor Nancy Green who gave invaluable support as the book developed, and to Guenet Abraham for the book design.  In particular, I’d like to note the tremendous patience that they all displayed in dealing with a total pain in the ass author.  And to all of the people at Elemental who made the space, both literally and figuratively for Greening Modernism to happen, especially my partners, Tom Abraham and John Barboni and to Michelle Black, the backbone of Elemental.  And to the three people to whom the book is dedicated, my mother Ethel Stein who unfortunately could not be here tonight, my wife Nancy Stein and my daughter and recently colleague, Jesse Denning.

Because I’ve never been responsible for an event like this before, I asked my author friend and colleague, Shira Rosan, for suggestions.  She said that although launches often include a brief reading from the book, she advised strongly against my reciting any of the tables such as the embodied energy contributions of each of the 79 primary sectors of the economy that contribute to New Office Building Construction, or the potential cumulative savings in trillion Btu or equivalent barrels of oil inherent in a ten-year program to reuse and upgrade existing buildings that might otherwise be demolished.  Although I’ve taken her words to heart, there are a couple of paragraphs that sum up much of Greening Modernism.

To be clear, sustainability references a future in which our children and grandchildren can exist and in which they will want to exist.  Given humankind’s incredible power to affect the natural environment, survival of the species is no longer an academic question.  As a result, much of the consideration of global sustainability might more appropriately be called survivability. Climate change, limits on food production, availability of clean water and air threaten the continued viability of the human species.  Because the problems are real and the stakes are high, it is often difficult for environmentalists, particularly those working on national and international matters, to take into account those factors which do not directly impact survival – the can exist issues.  However, in addressing questions of survival, it is important that we not lose sight of want to exist concerns, characteristics that define and enrich human experience.  These will include enjoyment of beaches and sunsets, trees and flowers, animals and birds.  They will also include appreciation of our cultural heritages and of our histories.

In scale, can exist may be seen as global whereas want to exist issues are generally local.  The relevance of the different scales brings to mind the mantra “think globally, act locally” whose application to environmental concerns is generally attributed to Dr. Rene Dubose.  However, a more holistic view suggests that this be rephrased as “think globally, think locally and act at wherever scale opportunity presents itself.”  That is to say that the conceptualization and understanding of sustainability must occur simultaneously at macro and micro levels in order to incorporate the complexities whose synergies are at the heart of any comprehensive ecological program.

Increasingly, we are finding resonances between maintenance of place, of genius loci, and global ecological survival.  These result from several fundamental conditions.  Much of what is valued by humankind is the result of a long, evolutionary process in which the growth and development of habitation of the planet has been informed by interaction with context.  Understanding the intrinsic value of what currently exists produces attitudes which are far more likely to adapt and reuse rather than demolish and replace, an integral aspect of any sustainable planning effort.

That being said, let me add that for tonight’s venue we can thank the creators of Hudson Clearwater, Mark Barboni, Chris Brandon and Matthew Hechter, for the spectacular food chef Wes Long and Michter’s for the fine Boubon.  I also want to thank the Melody Allegra Band, friends from Wednesday nights at the Grizzly Pear on McDougal Street.  They have very generously agreed to let me sit in with them for a couple of tunes, after which, I’ll be more than happy to sign copies of the book.”