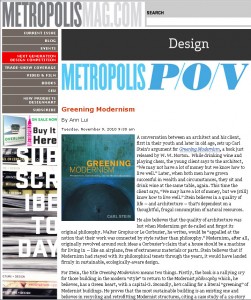 “A conversation between an architect and his client, first in their youth and later in old age, sets up Carl Stein’s argument for Greening Modernism, a book just released by W. W. Norton. While drinking wine and playing chess, the young client says to the architect, “We may not have a lot of money but we know how to live well.” Later, when both men have grown successful in wealth and circumstances, they sit and drink wine at the same table, again. This time the client says, “We may have a lot of money, but we [still] know how to live well.” Stein believes in a quality of life — and architecture — that’s dependent on a thoughtful, frugal consumption of natural resources.

He also believes that the quality of architecture was lost when Modernism got de-railed and forgot its original philosophy. Walter Gropius or Le Corbusier, he writes, would be “appalled at the notion that their work was connected by style rather than philosophy.” Modernism, after all, originally revolved around such ideas a Corbusier’s claim that a house should be a machine for living in — like an airplane, free of extraneous materials or parts. Stein believes that if Modernism had stayed with its philosophical tenets through the years, it would have landed firmly in sustainable, ecologically-aware design.

For Stein, the title Greening Modernism means two things. Firstly, the book is a rallying cry for those building in the modern “style” to return to the Modernist philosophy which, he believes, has a Green heart, with a capital-G. Secondly, he’s calling for a literal “greening” of Modernist buildings. He proves that the most sustainable building is an existing one and believes in recycling and retrofitting Modernist structures, citing a case study of a 29-story Cleveland high-rise. The building was marked for demolition until it was saved by a campaign to protect it and the city’s cultural heritage — in this case, the only high-rise by Marcel Breuer, the influential Hungarian-born Bauhaus graduate and instructor. The campaign, he notes, avoided the 1.7 million gallons of oil it would have taken to build anew.

Stein is critical of architects for focusing on “interior,” “façade,” “historic,” and even “green” design. Instead of this over-specialization, which leads to a piecemeal approach, he believes that sustainability and Modernism must join forces — philosophies that, after all, share key principles about holistic methods and precise design.

While Stein takes us on a journey through the history and practice of Modernism and green architecture, unfortunately his case studies are limited in scope: He focuses on vernacular architecture in his climate case studies while his contemporary examples include only Modernist and historicist buildings. He neglects to mention architects who came after Le Corbusier and Gropius, practitioners whose work might have relevance to the dialogue of Greening Modernism; Paul Rudolph’s early work comes to mind. Similarly he chooses to ignore America’s sprawling strip-malls and super-stores, which also need upgrading and retrofitting.

Nevertheless, Greening Modernism makes a good case for the reunification of two long-separated methodologies, with strong chapters on Le Corbusier and Ada Louise Huxtable’s key writings as well as a comprehensive analysis of lighting fixture Btus/hr. Ultimately Stein’s rallying cry is a call to rejoin architectural theory and construction technology. Stop thinking, he seems to say, about design principles and performance ratings as if they were two separate practices. They are one and the same.”